Last month Vans Warped Tour founder Kevin Lyman made a brief statement via Twitter that plans were beginning to take place for the 25th round of the festival, a festival which was thought to be done for good. It was announced last year that Warped Tour 2018 would be the festival’s last round.

“It was truly an honor to do a final cross-country run of Warped in 2018; to see fans from all eras of the tour come out for a day to celebrate an event that meant so much to them. I walked away from the final show with a true sense that the Vans Warped Tour became the community I had always hoped for”, Lyman shared in a press release this Monday.

Concert goers can expect all the thrills of the “old” Warped Tour plus lots more. The festival will feature over 50 bands across multiple stages, extreme sports, and an art exhibit that has come out of the tour’s history.

“With the [Vans Warped Tour] 25th Anniversary events, we want to bring the atmosphere of a classic Warped Tour show, but on a scale that our fans simply could not get with a national tour”, continued Lyman in the press release. “The bands, the special attractions, everything – we want to bring back elements that have made the Warped Tour, Warped Tour, over the past 25 years.”

The artist line ups will be announced Friday, March 1st. 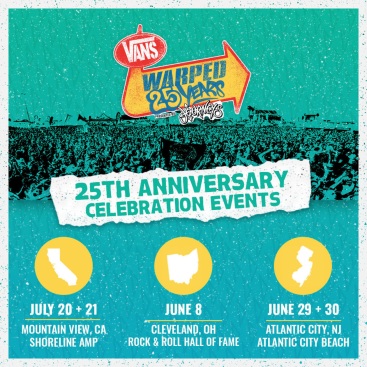 My name is Amber and I created and run Rainierrock.com. I love photography and music, and after discovering journalism in college, I created the site to have a way to combine all my passions. I enjoy loud rock music, strong coffee, and good books.